Hessian and Curvatures in Machine Learning: A Differential-Geometric View

In machine learning, especially in neural networks, the Hessian matrix is often treated synonymously with curvatures, in the following sense. Suppose $f: \R^n \times \R^d \to \R$ defined by $(x, \theta) \mapsto f(x; \theta) =: f_\theta(x)$ is a (real-valued) neural network, mapping an input $x$ to the output $f(x; \theta)$ under the parameter $\theta$. Given a dataset $\D$, we can define a loss function $\ell: \R^d \to \R$ by $\theta \mapsto \ell(\theta)$ such as the mean-squared-error or cross-entropy loss. (We do not explicitly show the dependency of $\ell$ to $f$ and $\D$ for brevity.) Assuming the standard basis for $\R^d$, from calculus we know that the second partial derivatives of $\ell$ at a point $\theta \in \R^d$ form a matrix called the Hessian matrix at $\theta$.

Often, one calls the Hessian matrix the “curvature matrix” of $L$ at $\theta$ [1, 2, etc.]. Indeed, it is well-justified since as we have learned in calculus, the eigenspectrum of this Hessian matrix represents the curvatures of the loss landscape of $\ell$ at $\theta$. It is, however, not clear from calculus alone what is the precise geometric meaning of these curvatures. In this post, we will use tools from differential geometry—especially the hypersurface theory—to study the geometric interpretation of the Hessian matrix.

We begin by formalizing what exactly is a loss landscape via the Euclidean hypersurface theory. We call an $n$-dimensional manifold $M$ a (Euclidean) hypersurface of $\R^{n+1}$ if $M$ is a subset of $\R^{n+1}$ (equipped with the standard basis) and the inclusion $\iota: M \hookrightarrow \R^{n+1}$ is a smooth topological embedding. Since $\R^{n+1}$ is equipped with a metric in the form of the standard dot product, we can equip $M$ with an induced metric characterized at each point $p \in M$ by

Intuitively, the induced inner product on $M$ at $p$ is obtained by “pushing forward” tangent vectors $v$ and $w$ using the Jacobian $J_p$ at $p$ and compute their dot product on $\R^{n+1}$.

where $(\cdot)^\top$ and $(\cdot)^\perp$ are the orthogonal projection operators onto the tangent/normal space of $L$ at $p$. We define the second fundamental form as the map $\mathrm{II}$ that takes two vector fields on $L$ and yielding normal vector fields of $L$, as follows:

See the following figure for an intuition. 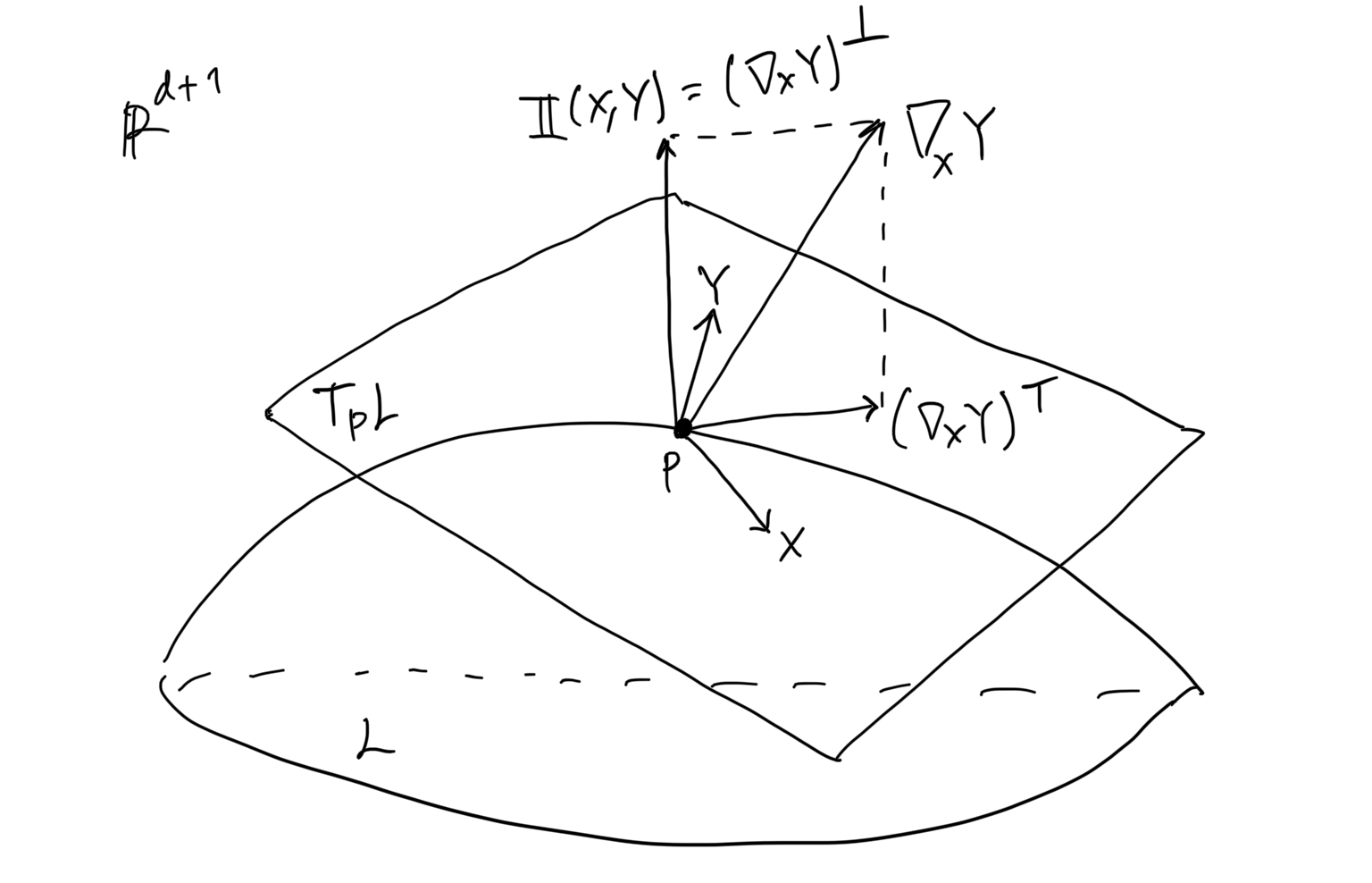 Since $L$ is a $d$-dimensional hypersurface of $(d+1)$-dimensional Euclidean space, the normal space $N_pL$ at each point $p$ of $L$ has dimension one, and there exist only two ways of choosing a unit vector field normal to $L$. Any choice of the unit vector field thus automatically gives a basis for $N_pL$ for all $p \in L$. One of the choices is the following normal vector field which is oriented outward relative to $L$. 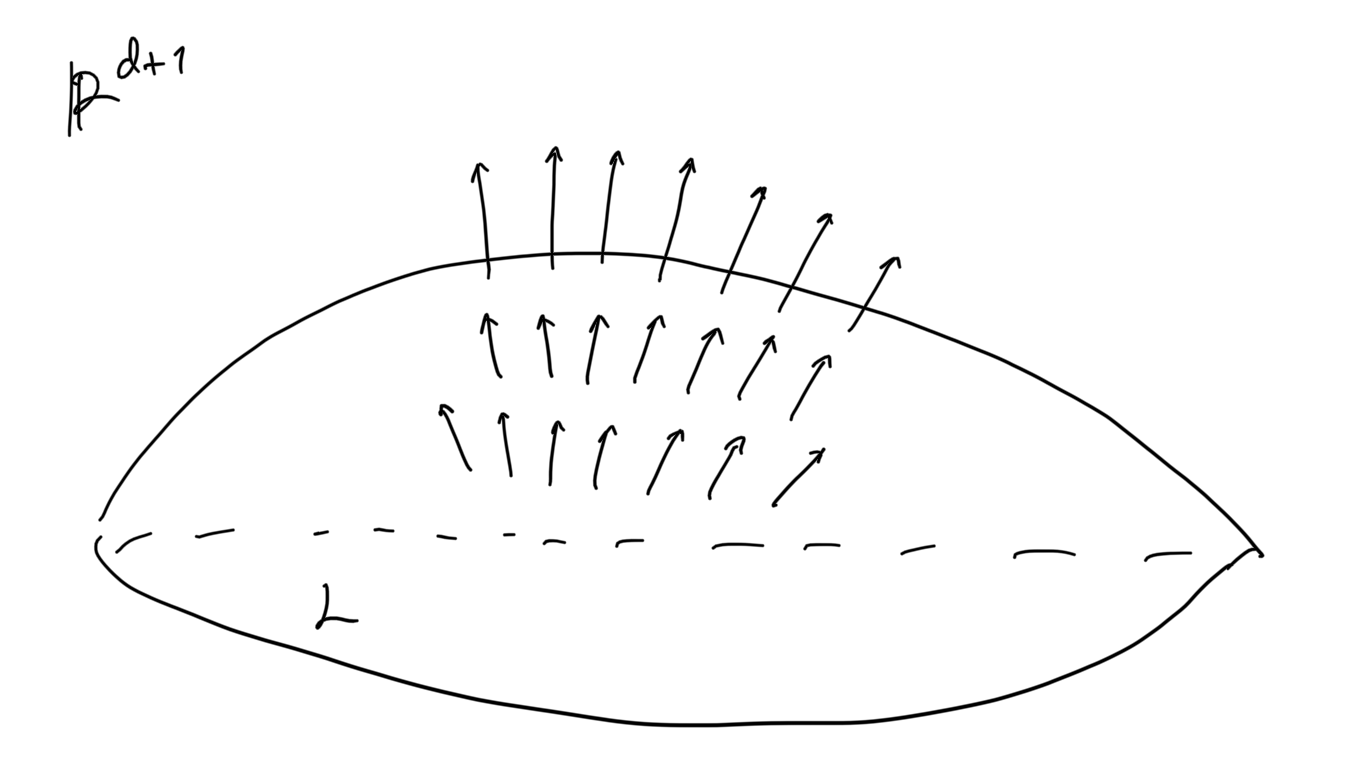 Another choice is the same unit normal field but oriented inward relative to $L$.

Furthermore, we define the shape operator of $L$ as the map $s$, mapping a vector field to another vector field on $L$, characterized by

Based on the characterization above, we can alternatively view $s$ as an operator obtained by raising an index of $h$, i.e. multiplying the matrix of $h$ with the inverse-metric.

Note that, at each point $p \in L$, the shape operator at $p$ is a linear endomorphism of $T_p L$, i.e. it defines a map from the tangent space to itself. Furthermore, we can show that $\mathrm{II}(X,Y) = \mathrm{II}(Y,X)$ and thus $h(X,Y)$ is symmetric. This implies that $s$ is self-adjoint since we can write

Altogether, this means that at each $p \in L$, the shape operator at $p$ can be represented by a symmetric $d \times d$ matrix.

The previous fact about the matrix of $s$ says that we can apply eigendecomposition on $s$ and obtain $n$ real eigenvalues $\kappa_1, \dots, \kappa_n$ and an orthonormal basis for $T_p L$ formed by the eigenvectors $(b_1, \dots, b_n)$ corresponding to these eigenvalues. We call these eigenvalues the principal curvatures of $L$ at $p$ and the corresponding eigenvectors the principal directions. Moreover, we also define the Gaussian curvature as $\det s = \prod_{i=1}^d \kappa_i$ and the mean curvature as $\frac{1}{d} \mathrm{tr}\,s = \frac{1}{d} \sum_{i=1}^d \kappa_i$. 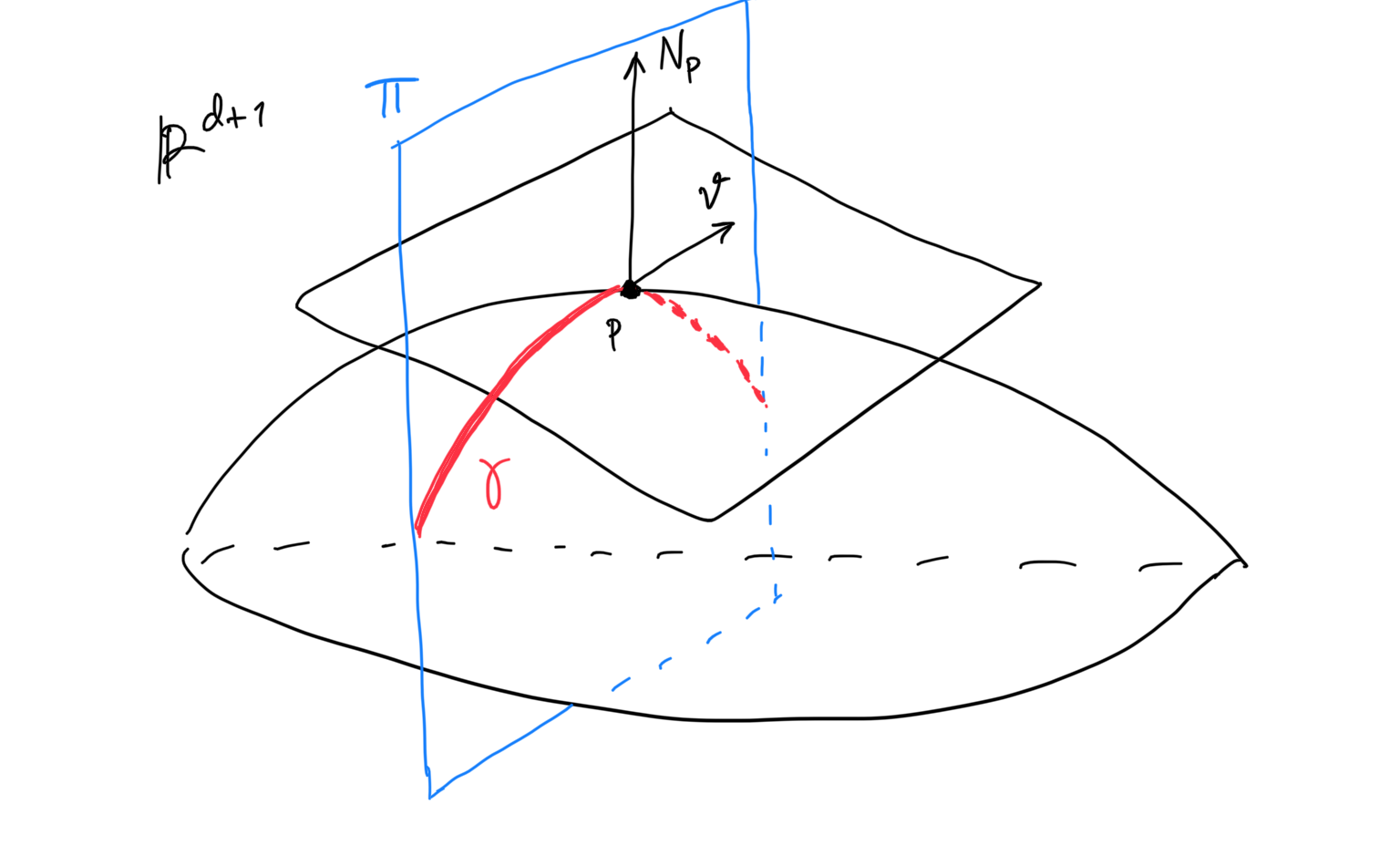 The intuition of the principal curvatures and directions in $\R^3$ is shown in the preceding figure. Suppose $M$ is a surface in $\R^3$. Choose a tangent vector $v \in T_pM$. Together with the choice of our unit normal vector $N_p$ at $p$, we obtain a plane $\varPi$ passing through $p$. The intersection of $\varPi$ and the neighborhood of $p$ in $M$ is a plane curve $\gamma \subseteq \varPi$ containing $p$. We can now compute the curvature of this curve at $p$ as usual, in the calculus sense (the reciprocal of the radius of the osculating circle at $p$). Then, the principal curvatures of $M$ at $p$ are the minimum and maximum curvatures obtained this way. The corresponding vectors in $T_p M$ that attain the minimum and maximum are the principal directions.

Let us suppose we are given a unit normal field to $L$. Then we have the following result.

Where $N^{d+1}$ is the last component of the unit normal field.

Taking the inner product with the unit normal field $N$, we obtain

As a side note, we can actually have a more general statement: At any point in a hypersurface with any parametrization, the principal curvatures give a concise description of the local shape of the hypersurface by approximating it with the graph of a quadratic function. See Prop. 8.24 in [3] for a detailed discussion.

In deep learning, there have been interesting works connecting the “flatness” of the loss landscape’s local minima with the generalization performance of an NN. The conjecture is that the flatter a minimum is, the better the network generalizes. “Flatness” here often refers to the eigenvalues or trace of the Hessian matrix at the minima. However, this has been disputed by e.g. [4] and rightly so.

As we have seen previously, at a minimum, the principal and mean curvature (the eigenvalues and trace of the Hessian of $\ell$, resp.) are not intrinsic. Different parametrization of $L$ can yield different principal and mean curvatures. Just like the illustration with the plane and the half-cylinder above, [4] illustrates this directly in the loss landscape. In particular, we can apply a bijective transformation $\varphi$ to the original parameter space $\R^d$ s.t. the resulting loss landscape is isometric to the original loss landscape and the particular minimum $\theta_*$ does not change, i.e. $\varphi(\theta_*) = \theta_*$. See the following figure for an illustration (we assume that the length of the red curves below is the same).

It is clear that the principal curvature changes even though functionally, the NN still represents the same function. Thus, we cannot actually connect the notion of “flatness” that are common in literature to the generalization ability of the NN. A definitive connection between them must start with some intrinsic notion of flatness—for starter, the Gaussian curvature, which can be easily computed since it is just the determinant of the Hessian at the minima.