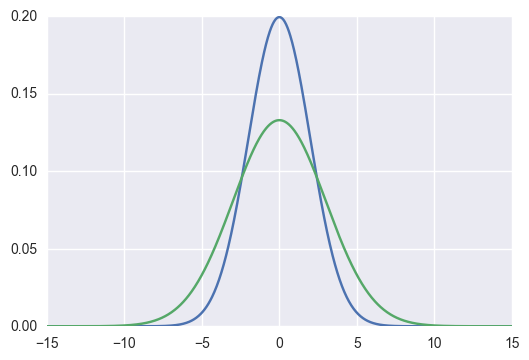 The KL Divergence could be computed as follows:

that is, for all random variable \( x \in X \), KL Divergence calculates the weighted average on the difference between those distributions at \( x \).

Just like any other distance functions (e.g. euclidean distance), we can use KL Divergence as a loss function in an optimization setting, especially in a probabilistic setting. For example, in Variational Bayes, we are trying to fit an approximate to the true posterior, and the process to make sure that \( Q(X) \) fits \( P(X) \) is to minimize the KL Divergence between them. 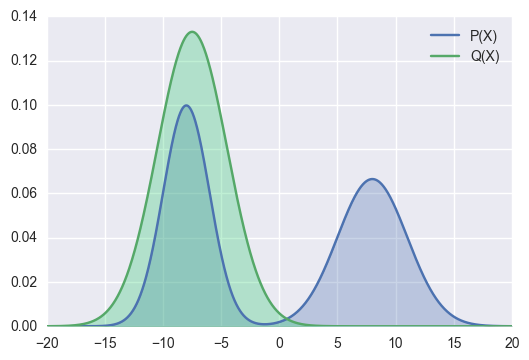 In the example above, the right hand side mode is not covered by \( Q(x) \), but it is obviously the case that \( P(x) > 0 \)! The consequence for this scenario is that the KL Divergence would be big. The optimization algorithm then would force \( Q(x) \) to take different form: 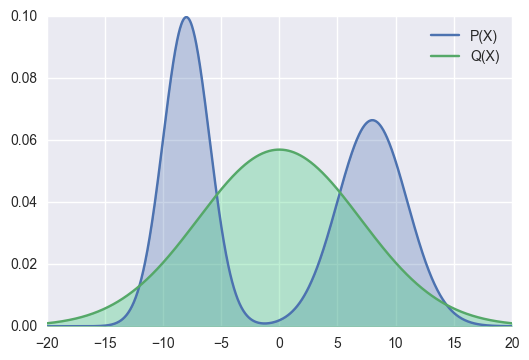 Although there are still some area that are wrongly covered by \( Q(x) \), this is the desired optimization result as in this form of \( Q(x) \), the KL Divergence is low.

Therefore, the failure case example above for Forward KL, is the desireable outcome for Reverse KL. That is, for Reverse KL, it is better to fit just some portion of \( P(X) \), as long as that approximate is good.

As always, the answer is “it depends”. As we have seen above, both has its own characteristic. So, depending on what we want to do, we choose which KL Divergence mode that’s suitable for our problem.