Generative Adversarial Nets, or GAN in short, is a quite popular neural net. It was first introduced in a NIPS 2014 paper by Ian Goodfellow, et al. This paper literally sparked a lot of interest in adversarial training of neural net, proved by the number of citation of the paper. Suddenly, many flavors of GAN came up: DCGAN, Sequence-GAN, LSTM-GAN, etc. In NIPS 2016, there will even be a whole workshop dedicated for adversarial training!

Note, the code is available in https://github.com/wiseodd/generative-models.

First, let’s review the main points about the paper. After that, as always, we will try to implement GAN using TensorFlow, with MNIST data.

There, we see we have a clash of interest. This kind of situation could be modeled as a minimax game in Game Theory. And this process is called Adversarial Process.

Generative Adversarial Nets (GAN), is a special case of Adversarial Process where the components (the cop and the criminal) are neural net. The first net generates data, and the second net tries to tell the difference between the real data and the fake data generated by the first net. The second net will output a scalar [0, 1] which represents a probability of real data.

At the equilibrium point, which is the optimal point in minimax game, the first net will models the real data, and the second net will output probability of 0.5 as the output of the first net = real data.

By the definition of GAN, we need two nets. This could be anything, be it a sophisticated net like convnet or just a two layer neural net. Let’s be simple first and use a two layer nets for both of them. We’ll use TensorFlow for this purpose.

The discriminator(x) takes MNIST image(s) and return a scalar which represents a probability of real MNIST image.

Now, let’s declare the Adversarial Process for training this GAN. Here’s the training algorithm from the paper: 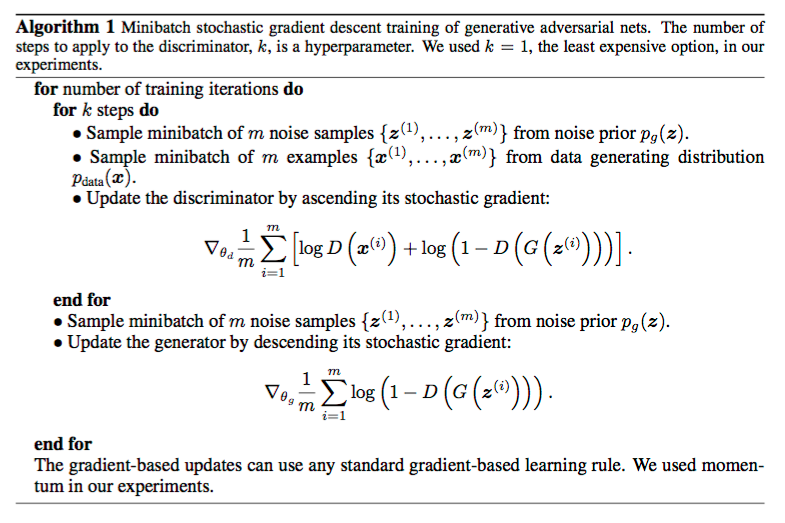 Above, we use negative sign for the loss functions because they need to be maximized, whereas TensorFlow’s optimizer can only do minimization.

Then we train the networks one by one with those Adversarial Training, represented by those loss functions above.

And we’re done! We can see the training process by sampling \( G(Z) \) every now and then:

We start with random noise and as the training goes on, \( G(Z) \) starts going more and more toward \( P_{data} \). It’s proven by the more and more similar samples generated by \( G(Z) \) compared to MNIST data.

We could formulate the loss function D_loss and G_loss using different notion.

Let’s follow our intuition. This is inspired by the post about image completion in Brandon Amos’ blog.

What about generator(Z)? It wants to maximize the probability of fake data! It’s the opposite objective of \( D(G(Z)) \)!

We’re using the Logistic Loss, following the notion above. Changing the loss functions won’t affect the GAN we’re training as this is just a different way to think and formulate the problem.

In this post, we looked at Generative Adversarial Network (GAN), which was published by Ian Goodfellow, et al. at NIPS 2014. We looked at the formulation of Adversarial Process and the intuition behind it.

Next, we implemented the GAN with two layer neural net for both the Generator and Discriminator Net. We then follow the algorithm presented in Goodfellow, et al, 2014 to train the GAN.

For the full code, head to https://github.com/wiseodd/generative-models!