BatchNorm a.k.a Batch Normalization is a relatively new technique proposed by Ioffe & Szegedy in 2015. It promises us acceleration in training (deep) neural net.

One difficult thing about training a neural net is to choose the initial weights. BatchNorm promises the remedy: it makes the network less dependant to the initialization strategy. Another key points are that it enables us to use higher learning rate. They even go further to state that BatchNorm could reduce the dependency on Dropout.

The main idea of BatchNorm is this: for the current minibatch while training, in each hidden layer, we normalize the activations so that its distribution is Standard Normal (zero mean and one standard deviation). Then, we apply a linear transform to it with learned parameters so that the network could learn what kind of distribution is the best for the layer’s activations.

The forward propagation of BatchNorm is shown below: 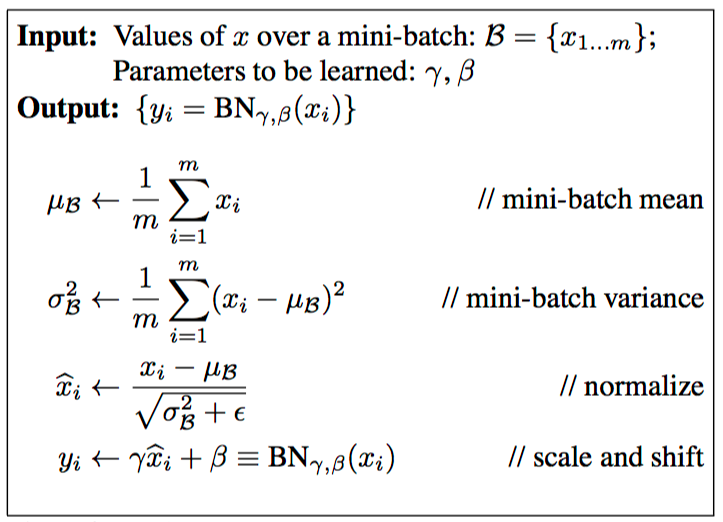 Well, we’re training neural net with Backpropagation here, so that algorithm is half the story. We still need to derive the backprop scheme for the BatchNorm layer. Which is given by this: 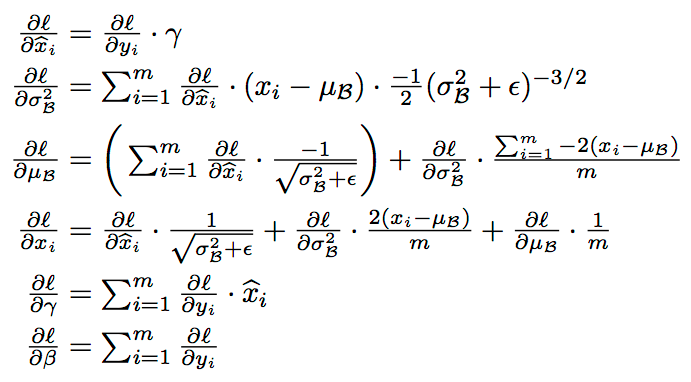 If the above derivation doesn’t make any sense, you could try reading this in combination with computational graph approach of backprop in CS231 lecture.

Now that we know how to do forward and backward propagation for BatchNorm, let’s try to implement that.

As always, I will reuse the code from previous posts. It’s in my repo here: https://github.com/wiseodd/hipsternet.

At the end, we’re also spitting out the intermediate variable used for normalization as they’re essential for the backprop.

This is how we use that above method:

For the backprop, here’s the implementation:

For the explanation of the code, refer to the derivation of the BatchNorm gradient in the last section. As we can see, we’re also returning derivative of gamma and beta: the linear transform for BatchNorm. It will be used to update the model, so that the net could also learn them.

Remember, the order of backprop is important! We will get wrong result if we swap the BatchNorm gradient with ReLU gradient for example.

One more thing we need to take care of is that we want to fix the normalization at test time. That means we don’t want to normalize our activations with the test set. Hence, as we’re essentially using SGD, which is stochastic, we’re going to estimate the mean and variance of our activations using running average.

There, we store each BatchNorm layer’s running mean and variance while training. It’s a decaying running average.

Then, at the test time, we just use that running average for the normalization:

And that’s it. Our implementation of BatchNorm is now complete. Now the test!

We’re going to use a three layer network with 256 neurons in each hidden layer and minibatch size of 256. We use 1000 iterations of Adam for the optimization. We’re also using Dropout with probability of 0.5.

It works wonder! The “unproper” initialization seems to make the non-BatchNorm network’s gradients vanish, so it can’t learn well. With BatchNorm, the optimization just zip through and converging in much faster speed.

Let’s do one more test. This time we’re using the proper initialization: Xavier / 2. How is BatchNorm compared to Dropout? In the paper, the authors made a point that by using BatchNorm, the network could be less dependant to Dropout.

The network with BatchNorm performs much better!

However, not all are rosy. Remember the no free lunch theorem. BatchNorm has a drawback: it makes our training slower. Here’s the comparison:

With BatchNorm, we’re expecting 30% slow down.

In this post, we’re looking at the relatively new technique for training neural nets, called BatchNorm. It does just that: normalizing the activations of the network at each minibatch, so that the activations will be approximately Standard Normal distributed.

We also implemented BatchNorm in three layers network, then tested it using various parameters. It’s by no mean rigorous, but we could catch a glimpse of BatchNorm in action.

In the test, we found that by using BatchNorm, our network become more tolerant to bad initialization. BatchNorm network also outperform Dropout in our test setting. However, those are with the expense of 30% increase of training time.