It’s a public knowledge that Python is the de facto language of Machine Learning. It’s not without reason: Python has a very healthy and active libraries that are very useful for numerical computing. Libraries like Numpy, SciPy, Pandas, Matplotlib, etc are very important building blocks for implementing Machine Learning algorithms.

So, let’s back to basic and learn how to create a simple 3-layers Neural Networks, and implement Minibatch Gradient Descent using Numpy.

To get clearer picture about the dataset, here’s the visualization: 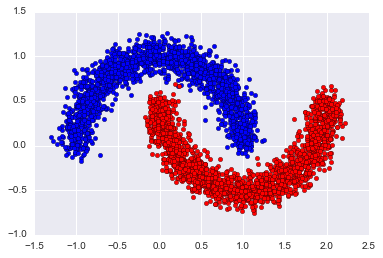 Next, we define our NN model. It will be a three layers networks (single hidden layer):

The basic scheme is to do series of dot product from input to hidden layer to output layer. In the hidden layer, we also apply some kind of non-linearity so that our NN could predict non-linear decision boundary. The hottest non-linearity function right now is ReLU, and we’re going to follow that trend.

We could use the model already, but it’s meaningless as it will yield random result (because of random initialization). So, what we need to do is to train the networks with our dataset.

The most popular optimization algorithm in Machine Learning is Gradient Descent. It’s a first order method, meaning that we only need to compute the gradient of the objective function to use it. Compared to the second order method like Netwon’s Method or BFGS, where we have to derive the partial second order derivative matrix (Hessian), Gradient Descent is simpler, albeit we have more to fiddle about.

Now, there are three variants of Gradient Descent: Batch, Stochastic, and Minibatch:

This is the skeleton of our training algorithm. Notice how we first shuffle the training data first then get chunks from it. That way we will get the random subset with size of minibatch_size of our full training data. Each of those random subset will be fed to the networks, and then the gradients of that minibatch will be propagate back to update the parameters/weights of the networks.

Lastly, we look at our get_minibatch_grad function:

What we do here is to iterate every data point in our minibatch, then feed it to the network and compare the output with the true label from the training data. The error is neatly defined by the difference of the probability of true label with the probability of our prediction. This is so, because we’re implicitly using the Softmax output with Cross Entropy cost function. See here for full derivation: http://math.stackexchange.com/questions/945871/derivative-of-softmax-loss-function

Let’s test our model and algorithm. We’re going to repeat the train-test procedure for 100 times then report the average of the accuracy.

With 10 iterations and minibatch size of 50, here’s what we get:

So, we get about 87% accuracy on average. Not bad at all!

Here, we showed how to define a simple Neural Networks model from scratch using Numpy. We also defined the forward and backpropagation operations of the networks. We then wrote an algorithm to train the network: Minibatch Gradient Descent. Finally we tested the trained networks using test dataset.

This model obviously a very simple Neural Networks model. If you noticed, it doesn’t even have bias! Nevertheless it served our purpose: implementing the Minibatch Gradient Descent algorithm.

Think of this post and codes as the foundation of the next posts about the more sophisticated and better optimization algorithms.